skip to main | skip to sidebar

While on the topic of San Francisco, I'd like to share some photos I somewhat recently took at Rickhouse, a whisk(e)y bar. 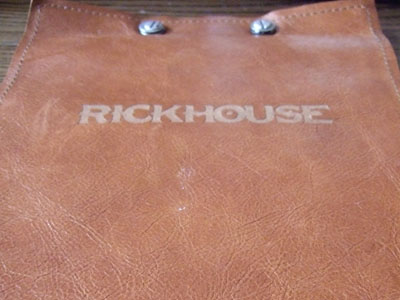 A leathery menu of fine whiskies/whiskeys. 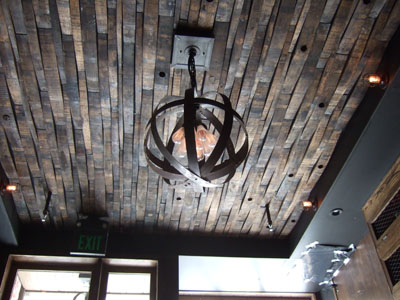 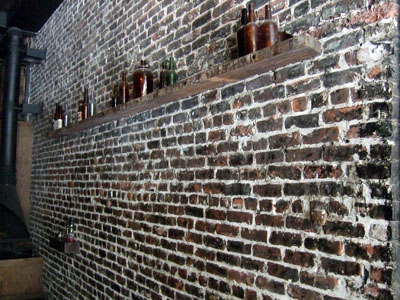 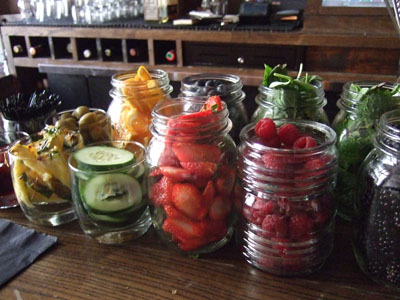 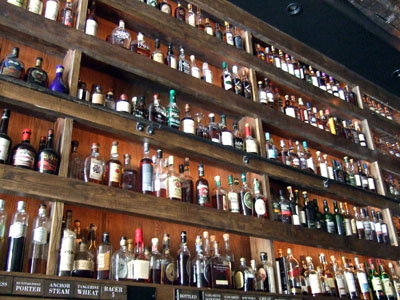 No short supply of fine spirits. 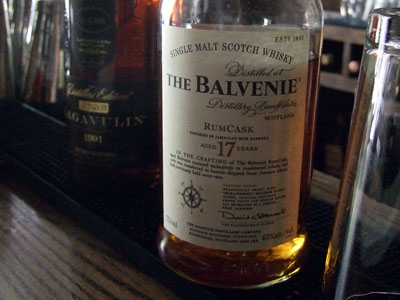 A "whisky" our bartender was quite enthusiastic to have us taste... The Balvenie's Single Malt Scotch Whisky matured in a Jamaican rum cask. While not terribly complex and more like a whisky-influenced rum than a rum-influenced whisky, it certainly was interesting. 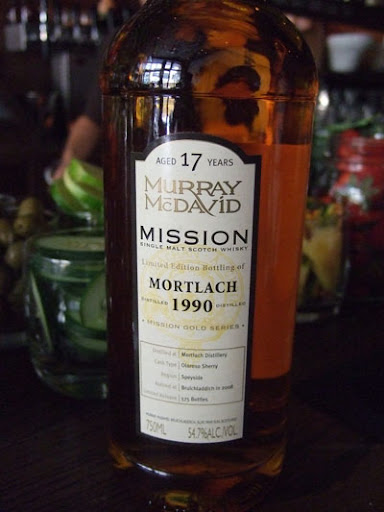 My dram for the afternoon... a 17yr old Murray McDavid bottling of Mortlach

N: Lots of sherry and no detectable peat. Oranges and tropical fruits. With water, the toffee surfaces as well as a touch of peat.

T: Loads of malt. Plenty of sherry. Finishes with juicy fruit.
Posted by Scotch Samurai at 10:32 PM No comments:

I apologize for the delay. My backlog of photos, tasting notes, etc. is steadily increasing and as it is, this post is almost 2 months overdue!

When we arrived, we were given a plethora of reading material along with our commemorative Glencairn nosing glass. 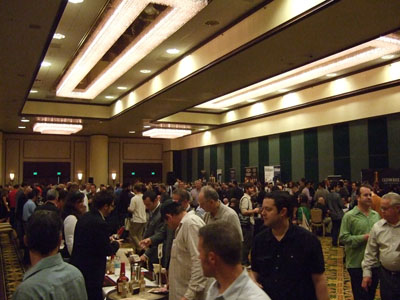 This represents perhaps less than 1/4 the attendees and booths. Most major Scotch distilleries that export whisky to the U.S. were represented. 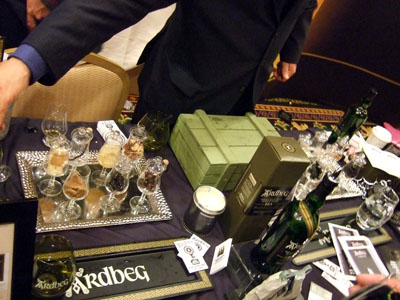 Not at all surprising that Ardbeg had one of the most interesting booths. They were also serving the highly anticipated Corryvreckan due out in early 2010. Unfortunately, all the peat-heads pulverized the booth's allotment of Corry before we reached it (although now, I am far less bitter about it as I am typing this entry while having a dram of his heavenly whisky). 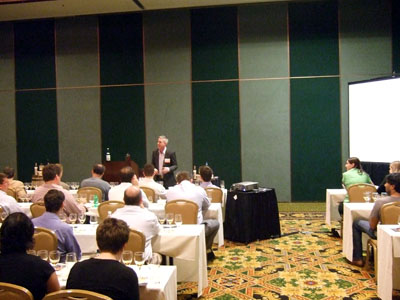 And also too late for a seat at Laphroaig's presentation and guided tasting... 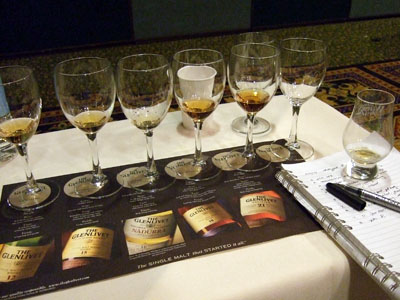 The Glenlivet's presentation had several open seats. While initially disappointed, the presentation was actually quite informative and entertaining. They were also quite generous with their more rare and costly whiskies. 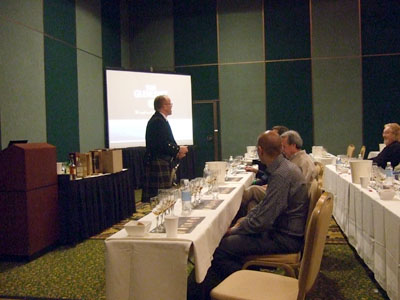 A Welshman in a kilt guiding us through the tasting.

1. Three hours was most definitely not enough time to try all the whiskies one would be curious about and have a sensible enough palate left to distinguish one from the other. If I were to attend next year's event, I'd have a clear plan and adhere to a self-made schedule.

2. Arrive early to the presentations which will obviously be popular.

3. I prefer a format where there are fewer whiskies to taste and more time to evaluate each one... and hopefully with a smaller entry fee!
Posted by Scotch Samurai at 10:01 PM No comments:

To commemorate a special event, I recently purchased a bottle of the rare Laphroaig 30yr from a private party for a very reasonable price. After engaging one another in a bit of whisky talk, the seller decided to pour a bit of the Laphroaig from another bottle for me to taste so I wouldn't have to break the seal on the one I just purchased. That "bit" wound up being a solid 3-4 drams! Cody, you're a true gentleman! 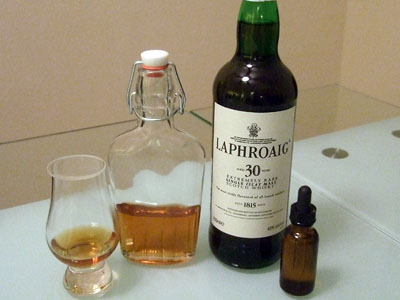 To date, this was the oldest whisky I've tasted so I took a few pointers on how to enjoy this dram to its fullest. After pouring the dram, I had a tiny bit of Glenfiddich 15yr to get me ready (something cheap and sherried).

They say older whiskies tend to require more time to open up and reach their full potential... the better whiskies will evolve multiple times. So I waited with the Glencairn glass covered.

N (after 10min): A tiny bit of sherry. Mellow iodine and peat of Islay.

N (after 30min): Even more sherry. Brine calmed down considerably.

T (finally): Sherry sweetness, but something is noticably different and foreign. Malty. All the usual sea elements plus a little clam/oyster brine. Finishes with sweet fruits I don't recognize.

T (with water): Still sweeter. Fruits getting stronger... moreso on the arrival. Smoother. Still quite peated, but not as intense. Drying finish. Sea elements almost gone (tiny bit in finish).

As more time elapsed (into the 45min territory), the peat nearly disappeared entirely. The foreign fruits became even more pronounced and started to resembled papayas or possibly guava. The oakyness finally started giving off hints of tobacco.

This wasn't the most complex whisky I've ever tasted, but it certainly had the most unfamiliar flavors. The development/evolution was absolutely spectacular.
Posted by Scotch Samurai at 8:30 PM No comments:

I'm about a full season too early with this, but my friend Erik (who is feeling under the weather today) and I were discussing the medicinal properties of Hot Buttered Rum. Basically, the only difference between Hot Buttered Rum and a Hot Toddy is the underlying spirit (Rum vs. Scotch whisky). Using ingredients I already had readily available, I decided to experiment with a bottle of Isle of Jura 10yr I really didn't want to finish. 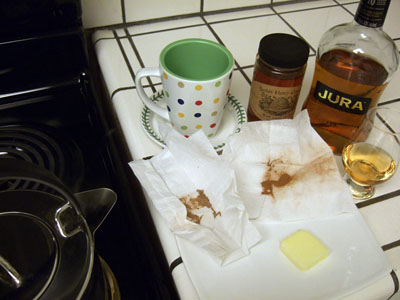 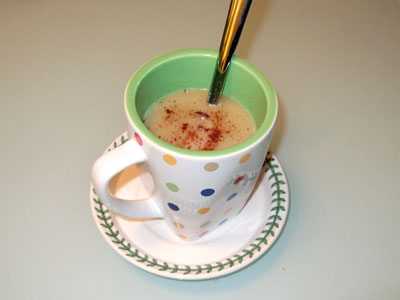 What an interesting elixir! I feel better already (although I was not suffering from any ailment prior to consumption)!

However, next time I will modify the recipe slightly. A touch less water, a touch less butter, brown sugar instead of honey (or in addition to), and something other than Jura. Although in Hot Toddy format the Jura is quite a bit more palatable, I can still tell it's Jura. Most recipes I've seen call for a cheap Scotch blend, but I feel something along the lines of a Springbank will really make this wintery beverage something to savor.
Posted by Scotch Samurai at 8:11 PM 1 comment:

My backlog of whisky tasting notes and pictures is growing rather rapidly, I'm afraid. Bear with me as I struggle to recall a couple drams where I didn't have my notepad... 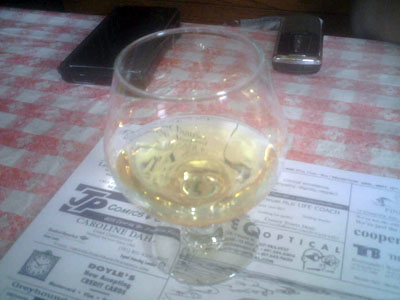 This was a bizarre dram. It was one of the lightest and most delicate whiskies I've had in recent memory and had none of the peatiness Ledaig is known for. The bottle (once again) only had a single pour left in it, and it looked like it had been sitting on its shelf for years judging by how much dust was on it. Peat doesn't exactly just go away when a whisky oxidizes.

It wasn't particularly fragrant but had a reasonable array of fruits on the palate. Finish died off rather quickly. Perhaps a good summer whisky? 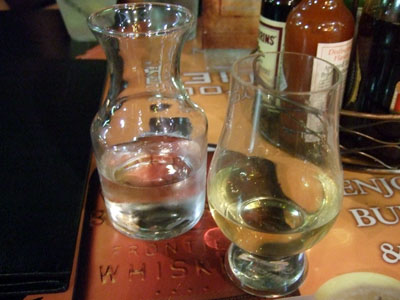 This was my first experience with a Benromach, but its reputation preceded it. The Benromach distillery is owned by the independent bottlers, Gordon & MacPhail, who know a thing or two about whisky.

A: A light gold. Mildly oily.

T: Maltier and peatier than expected. With water, the sherry rolls back as the peat intensifies. Always a pleasure to experience peat outside of an Islay context.
Posted by Scotch Samurai at 8:35 PM 1 comment:

Okay, so there was a definite theme to the NYC leg of this trip. Seek out rare and exclusive Scotch whiskies from silent-stills (distilleries that ceased operations). A little self-indulgent, I know...

At Hudson Bar and Books in West Village, I found a bottle of Brora 21yr that was not on the menu... with a single dram remaining. 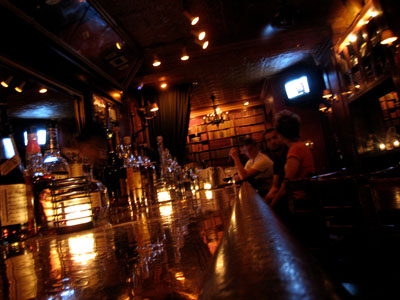 3. Cigars. The place to go if you like a cigar with your whisky. Not a compelling reason to visit if you're just interested in the whisky. 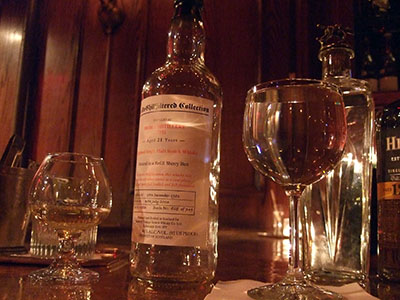 Brora 21yr Signatory Un-Chillfiltered Collection (46% ABV). Distilled in 1981. Bottled in 2003 (which concerned me because I didn't want a heavily oxidized "last pour"... there will be a future blog entry on this subject).

A: Light gold like the 24yr. Less oily as expected.

N: Difficult to gauge properly. Bar was heavy with the aroma of cigars and tobacco. Less alcohol burn than the 24yr. Lots of sherry and malt, like the 24yr. With water, nose became sweeter and more sherried.

T: Pepper, spice, honey, and juicy fruits. Less peated than the 24yr. With water, the spice and peat intensified slightly, as did the sherry.

Overall, the Brora wasn't as flat as I was initially expecting. It really was the more mild-mannered brother to the 24yr Cask Strength.
Posted by Scotch Samurai at 7:38 PM No comments:

My first taste of Brora, a silent still, was at the illustrious Brandy Library in TriBeCa. 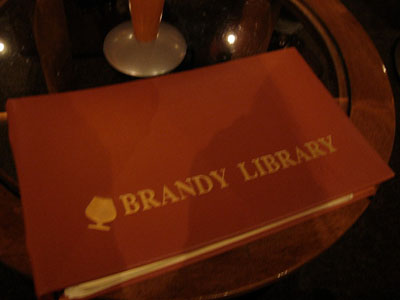 There are 3 good reasons for spending your hard earned cash at Brandy Library:

1. Something for everyone. Easily the most staggering SMS list I've seen in any bar or lounge.
2. Incredible ambiance. Perhaps a little pretentious, but definitely aimed at making the whisky enthusiast feel at home. Take a look (panoramic shot I feebly spliced together). 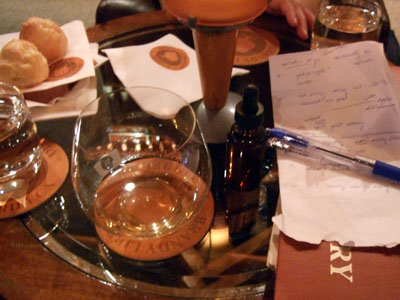 3. The most amazing cheese/bread/puff-pastry concoction ever baked. I really wish I wasn't drinking whisky at the time because the mouth-watering fragrance of this bread was wafting throughout the "library". 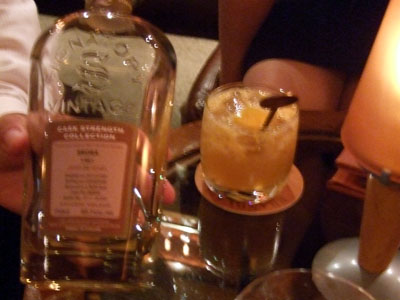 N: Alcohol singed my nose hairs. Along with the malt, there was a definite savory element to it. Almost like meat. Definite sherried oak influence (aged in Sherry refill cask). With water, light caramel notes surfaced as well as more malt and a hint of something herbal.

T: Neat, it is INTENSE. Sherried oak, juicy fruits, pepper, spice, and peat. With water (and a little air), there's more malty mash and the sherry actually intensifies. To me, this whisky embodied the best elements of Talisker and Highland Park (even though both distilleries are Islanders and Brora was a Highlander).

Amazingly complex and it's no wonder enthusiasts, connoisseurs and collectors so rabidly seek out Broras. Sorry, but I finished the last drops Brandy Library had of the Signatory bottling.
Posted by Scotch Samurai at 6:39 PM No comments: